Is the “Rapture” A Zionist Invention? A Conversation with Chuck Baldwin

The Passport to Enslavement: A Conversation with Helen Buyniski

How Does This End?

Isn’t this awesome?! We are living just like Jesus did! We don’t have to imagine what it was like when Jesus and his pals were occupied and Jesus was executed, it is happening now and you are helping Caesar do it! Remember, any excuse is as good as another to get the oppressor to take away everything you have. A virus, terrorists, cooties, whatever works.

Tomorrow is Palm Sunday. To what parade will you shout your hosannas? To the parade of Jesus or the parade of Caesar? Careful how you answer as there will be consequences! It is so cool to live in the times of Jesus. Hugs.

I will have a Palm Sunday sermon tomorrow, inshallah, but I thought you might like to read a few from the past.

This is from Palm Sunday 2019, Passion, Protest, Poetry, and Possibility. An excerpt:

“Last night I was in Seattle at the Husayniah Conference. This was a conference sponsored by the Husayniah Islamic Society of Seattle. I was a panelist. We showed the mini-documentary, “For Love of Hussain (a.s.)” about Josh’s and my trip to Iraq for Arbaeen. It was well-received. They were very kind, giving us a standing ovation. Many talked to me about it in person after the showing.

In addition to the film, there was a panel discussion. The topic was “Sacrifice and Giving in Faith Traditions.” On the panel was a Jewish rabbi, a Buddhist, a Muslim Sheikh, a personal development leader, and me, a Christian pastor. We were each asked to spend five minutes on a figure who exemplified sacrifice and giving from our own religious tradition.

I chose Thomas Merton. I have been using reflections from his 1966 book, Raids on the Unspeakable, for worship during Lent. I talked about Merton, the author of 70 books, countless essays and letters, as an interfaith leader who engaged with the Dalai Lama, and who was a passionate advocate for peace. He was the first American religious leader to speak out forcefully against the Vietnam War. He was a mentor to the Berrigan Brothers who burned draft cards. The FBI had files on the Berrigans and the CIA had a file on Merton, even intercepting his mail.

Merton died on December 10th, 1968 in Bangkok, Thailand while at a conference. He was giving a series of lectures. The popular lore that has been repeated again and again by his many biographers was that he died accidentally while coming out of the shower and touching a fan that electrocuted him. I spoke about a recent investigation by Hugh Turley and David Martin as well as the position of Matthew Fox that this accidental death narrative is a fiction. Evidence, for those who care to examine it, shows that his death was not accidental, but a murder set up to look like an accident. The investigators, Turley and Martin, and Matthew Fox are convinced that Merton was murdered by the CIA because of Merton’s popularity as an anti-war leader.

I went on to say that in 1968 Robert Kennedy and Martin Luther King were also assassinated. Those who have courageously and diligently researched their deaths (Lisa Pease in Robert F. Kennedy’s case and William Pepper in Martin Luther King’s case) have shown that those deaths were not by lone gunmen but were the result of forces within our own government. This goes as well for President John F. Kennedy. The consciousness of Americans is awakening to the reality of these murders.

I continued last night by saying that this is the world in which we live. We live in a nation with 800 military bases around the world, that spends a trillion dollars a year on military endeavors even as we are not threatened by any enemy. Those who resisted this military madness, the Kennedys, Martin Luther King, Thomas Merton, end up dead, and the accounts of their deaths are turned into fictions to protect the guilty. And the wars rage on. It is all perfectly normal, isn’t it?

Merton and these others exemplify sacrifice because they gave their lives for peace, martyrs for peace, even as the stories of their deaths do not recognize this sacrifice.”

This is from a few years ago. No More Crosses. An excerpt:

“Jesus was about making changes in this world. That is what got him killed.

Dying was not his reason for living.

Living was his reason for dying.

The only difference is that while those others are unknown to us, we know some of Jesus’ story. We know about what he lived for.

I think it is a sham and a shame that the religious establishment distorted his story. They took his story and turned into a caricature. Here is the theological story that is as common as dirt. You all know it. Here is the basic plot.

Once upon a time, God created Heaven and Earth. God is good, just, and perfect. He created Adam and Eve and put them in a garden. Well we know that is fiction as we know that human beings are the product of evolution that has taken billions of years. But OK.

Adam and Eve sinned by disobeying. A talking snake convinced the “bad” woman to eat some fruit from a tree from which they weren’t supposed to eat. The logic of this is that because of Eve and Adam everyone on the planet therefore deserves eternal punishment in hell.

God’s honor has been damaged by Adam and Eve’s sin. So God sent Jesus the God/Man to be sacrificed (like a goat) to satisfy God’s honor and to pay the penalty that we deserve, in fact you deserve, even though you didn’t eat the fruit. But you did all kinds of other bad things and had bad thoughts (usually having to do with sex) so it all washes.

But if you believe in that story you will go to heaven and not hell.

That story is supposedly better than what really happened?

And the crazy thing is that we just take it. We accept it.

Hardly anyone raises an objection. No one says,
“Wait a second! Jesus had to die this bloody torturous death because I am so bad? Even though I wasn’t even born when he died?”
It is actually rather sick. Seriously. It is pathological theology. We simply take it.

In fact, I can sense right now people squirming in their pews because they think I am being blasphemous by being so frivolous with this story. Why is that? Why so scared? Because the holy weight of theological double-talk has been crushing our spirits for centuries.”

Another from Palm Sunday 2011, The Empire Strikes Back. An excerpt:

“The story of the execution of Jesus is the story of Rachel Corrie. Rachel would have been 31 this past week. But she died at the age of 23 standing in front of an Israeli bulldozer when it razed a Palestinian home. It didn’t stop for her. It rolled over her and crushed her to death. She was standing for justice. Empire crushed her. The struggle continues.

The story of the execution of Jesus is the story of Matthew Sheppard. Twelve years ago, a young college student was beaten, tortured, and tied to a barbed wire fence in Wyoming because he was gay. It is the story of fear, homophobia, bullying and ignorance preached in pulpits and too often ignored by those with the authority to stop it. The struggle continues.

The story of the execution of Jesus is the story the indigenous people of the Amazon. For three decades Texaco operated 300 oil wells in Ecuador horribly polluting the land and destroying the lives and culture of the people who inhabit the rain forest. These stories are covered over, rationalized, dismissed. Empire needs to keep happily motoring. The struggle continues.

The story of the execution of Jesus is larger than the human story. It is the story of the largest extinction of species in 65 million years, right before our eyes as our climate changes, our rivers and streams are filled with toxins, and our mountains are destroyed for the prize beneath them. Empire can’t stop itself. The struggle continues.

“Father forgive them for they know not what they are doing.”
And yet…everywhere you look, you see resistance. Everywhere you look you see signs of green things growing from the stump of Empire’s destruction. It won’t be the same, but it will be something. Amidst all the craziness in the world now, there is sanity. There are pockets of decency and hope. Empire killed Jesus. But it didn’t defeat him. That is Easter. Next week. The struggle continues.”

Stand On Your Feet (A Sermon for Palm Sunday 2020) Freedom Loves Company
Freedom Loves Company on Revolution Radio explores the many facets of our emerging dystopia and the ultimate defeat of evil.
Episode 426: Is the "Rapture" a Zionist Invention? A Conversation with Dr. Chuck Baldwin
by John Shuck 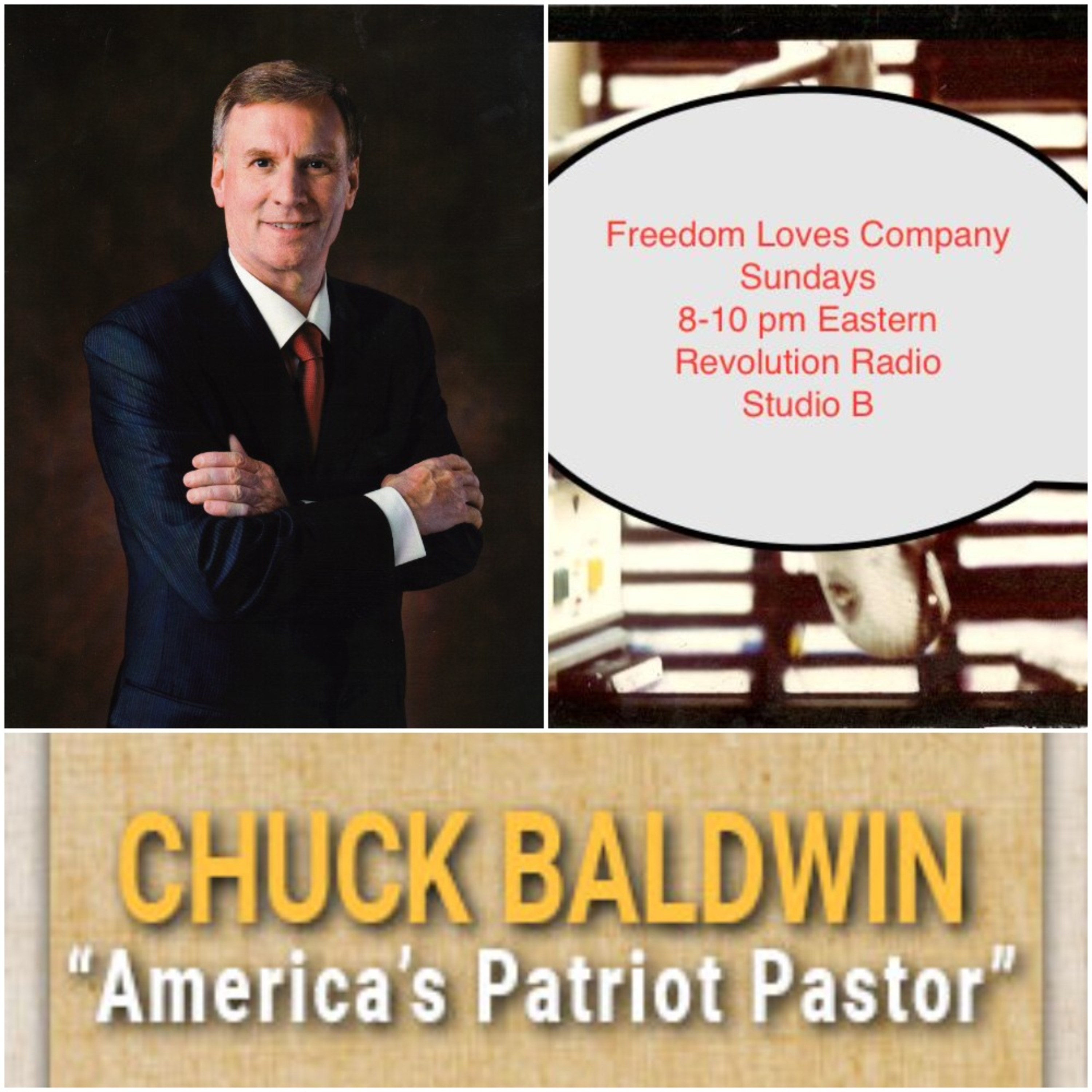 Dr. Chuck Baldwin is the pastor of Liberty Fellowship in Kalispell, Montana. His sermons and columns are seen and read around the world at ChuckBaldwinLive. I spoke with him in May 2020 regarding the “Covid Psyop” and he returns to discuss the Scofield Bible and its influence on evangelicalism, particularly in reference to the “rapture” and other Christian Zionist doctrines. He believes that it is because of Christian Zionism that the vast majority of evangelicals cannot see this Covid Psyop for what it is.

Is the “Rapture” A Zionist Invention? A Conversation with Chuck Baldwin

The Passport to Enslavement: A Conversation with Helen Buyniski

How Does This End?

Dr. Peter McCullough and the Facts on COVID 19